Posted by: Heathbar on: June 10 2014 • Categorized in: Uncategorized

On May 24, we disccovered a swallowtail caterpillar munching on carrot leaves in the garden. The little guy was doing some serious damage to the carrot patch, so leaving him there was not a desirable option. Being a big fan of swallowtail butterflies, I didn’t want to hurt him, either. Our seedling dill plants were still too small to be a viable alternative food source, so after about 5 minutes of deep consideration (ahem), we decided to adopt him. Griff named him “Mister Stripey”. 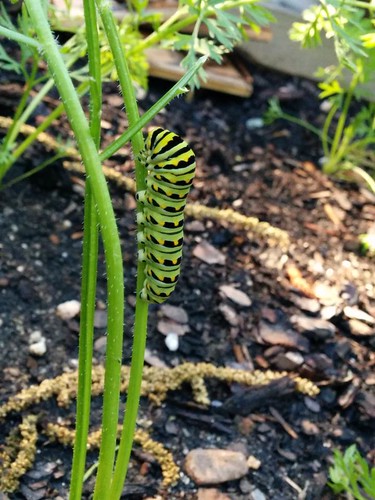 We put him into a quart jar with some carrot leaves and sticks, and he proceeded to make himself at home. 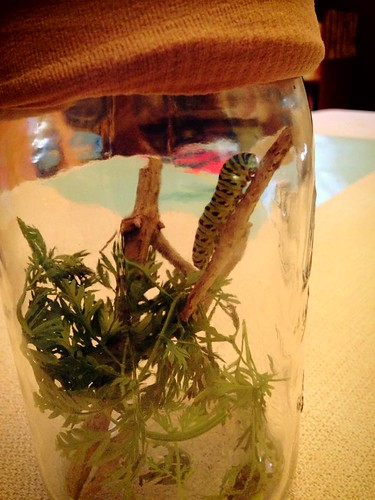 The next morning, we bought a small plastic terrarium that would better accomodate an adult butterfly’s 3-inch wingspan. 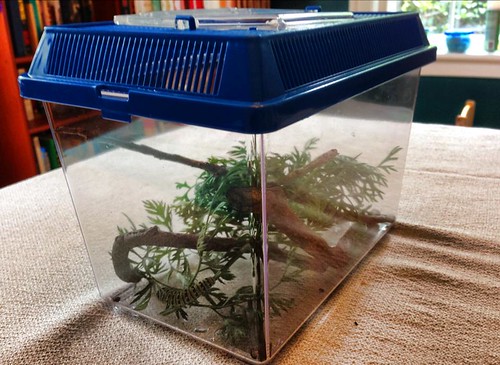 The next few days were spent swapping in fresh carrot greens twice a day (caterpillars are picky about the freshness of their food) and cleaning the caterpillar poop from the terrarium (towards the end of this period, he pooped a LOT). Here he is eating carrot leaves like there’s no tomorrow: 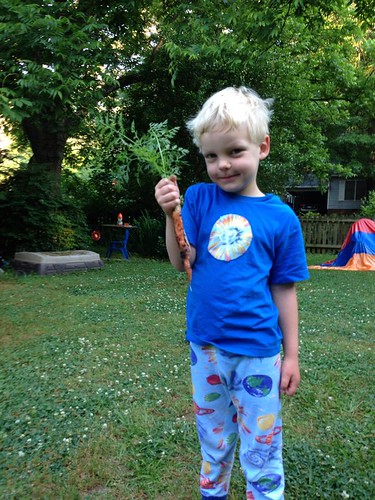 Based on his appearance, we learned that he was in the 5th and final instar, or caterpillar molting stage, and that he would spend the next few days eating himself silly before the final transformation.

On May 27, he purged himself (ie, had a huge runny poop). We had read that this was a sign he would soon be molting into his chrysalis stage. He ignored all the sticks we had helpfully placed in his terrarium and climbed up to the lid, attatched himself there with silk, and spent about 24 hours motionless in a “J” shape. He began to wiggle around again the night of the 28th, but I gave up watching in the wee hours of the morning, and we woke up to a chrysalis on the 29th. 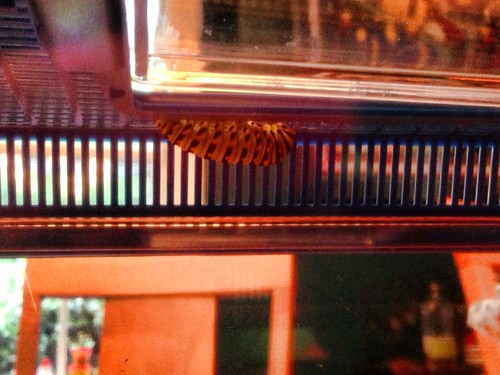 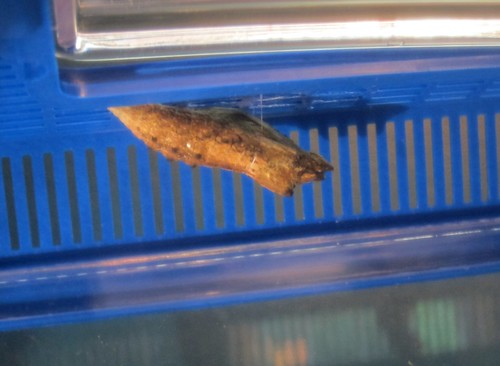 At this point he didn’t need any active care, so we placed the terrarium on a bookshelf near, but not in front of, a window, in a room that got at least 14 hours of combined artificial and natural light. (This amount of light is required to keep the chrysalis from going into diapause, or a sort of winter hibernation.) Since the AC is running all the time, I draped a damp washcloth over part of the terrarium to make sure there was a source of humidity and he wouldn’t dry out. The transformation was very gradual, but on June 8th we noticed that he was definitely looking different: his chrysalis was darker and drier, almost papery looking, and the shape had changed. He was also wiggling in response to his terrarium being moved. 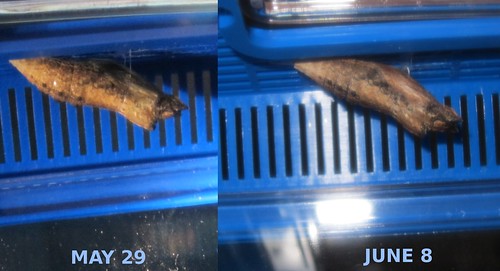 On the morning of the 10th, there was a very noticeable change. The chrysalis was very dark, and looking much more translucent. Throughout the morning, the chrysalis became more and more transparent, to the point that the yellow spots on the black butterfly body and wings inside were visible. 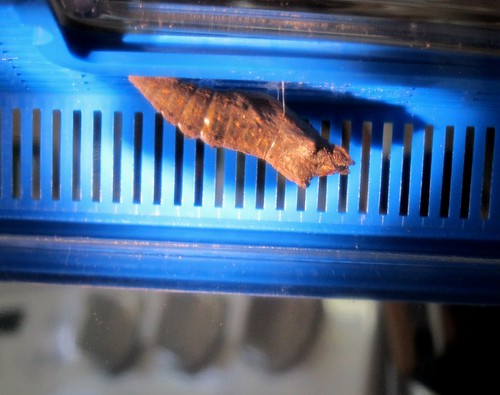 I kept checking every 10 minutes or so, and at one point I noticed that he was making some vigorous wrigging motions. Just in time, I grabbed a camera and a flashlight (since his position on the terrarium lid made the lighting poor) and watched him emerge from the chrysalis. Or, I should say, watched HER emerge: Mister Stripey is a Ms. 🙂

Here’s a video of the emergence. Please excuse the Blair Witch-style hyperventilating and the background noise from the dishwasher. I was really worried she would fall off the lid of the terrarium and damage her wings, but luckily she was fine.

The eclosion happened in under 2 minutes, and if I hadn’t checked back frequently, I would have missed it. Ms. Stripey pumped fluid into her crumpled wings, and within 10 minutes they were fully extended (but not usable or fully dry, yet). 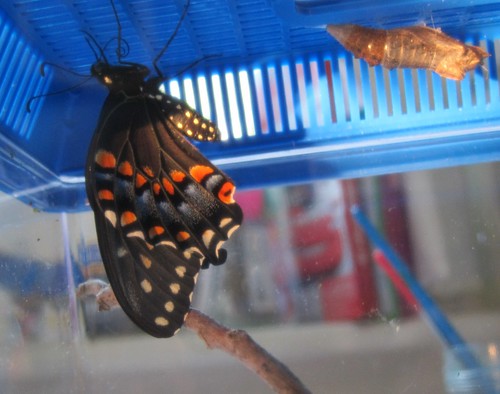 After about 45 minutes she opened her wings fully, and that was when I realized she was a she. She fluttered around a little, but was back to resting quietly when I left the house to pick up Sean at work and Griff at preschool. By the time we got home, she was quite active in the terrarium, and it was clear she was ready to head outside.

She was hanging up on the terrarium lid again, so Sean held it near a patch of brown-eyed susans that are growing under a butterfly bush in the yard. She readily fluttered onto one of the flowers and spent about 10-15 minutes testing her wings before she hopped up onto the butterfly bush. 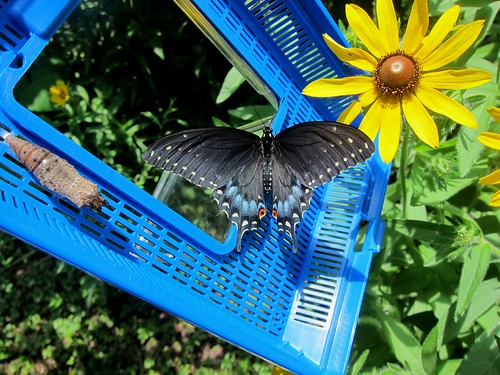 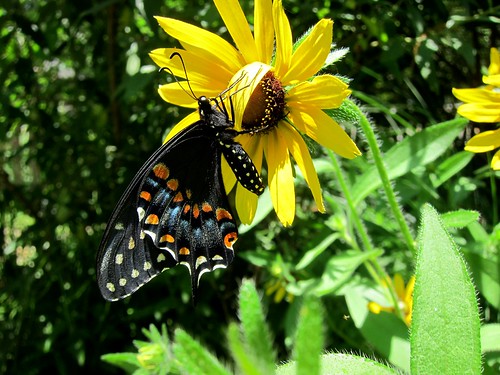 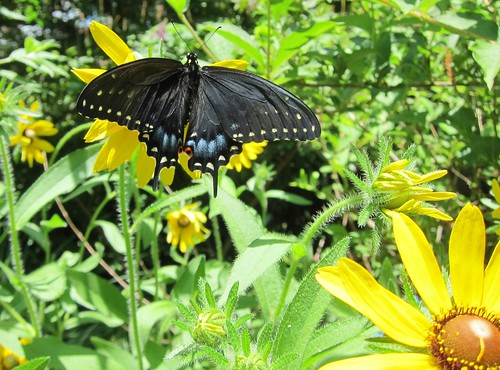 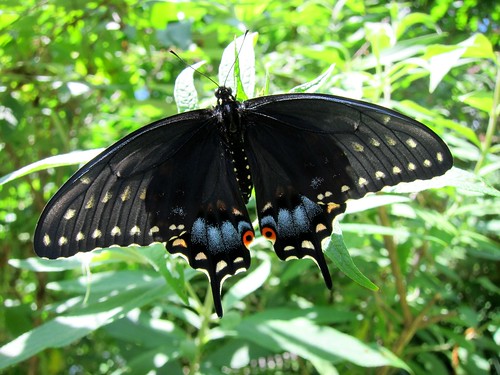 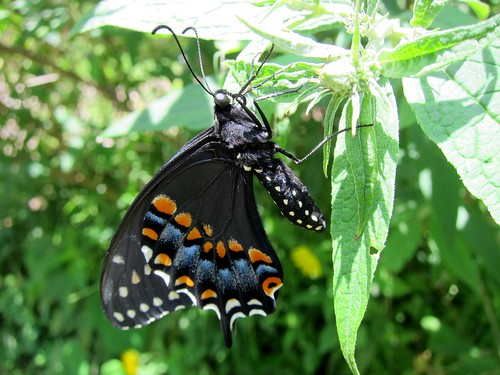 We went into the house for lunch, and when we came back outside about 20 minutes later to check on her, she was fluttering in high circles around the butterfly bushes. She made a circuit of the yard, and then rapidly flew away in search of her next big adventure. If we’re really lucky, we may get to raise some of her babies later this summer. Luckily, I planted some extra dill. 🙂

Comments: Comments Off on The Saga of Mister (er, Ms.) Stripey

« Picking up where I left off….
Go Play Outside Now »